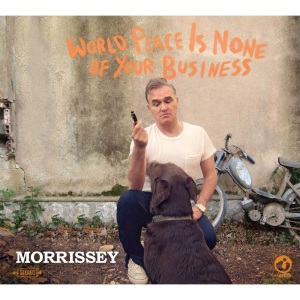 Walking through the doors of the venue, my eye was caught by the sight of the merchandise stand and the words “tote bag”. Someone somewhere in merchandising seems to have decided that this is THE must have gig momento, but this one was different. Emblazoned across it were the words “Be kind to animals or I’ll kill you. Morrissey”. I couldn’t stop a smile spreading across my face. In a world where (according to Noel Gallagher) “Everyone has to like everyone” and in the same week that Jeremy Clarkson has possibly let his final faux pas slip for BBC sensibilities, this is the Morrissey I’ve always loved – principled, outspoken and witty.

And it didn’t stop there. Dispensing with the services of a support band, the audience were shown a series of clips of influences in Morrissey’s life, starting with The Ramones. Following on were the likes of The New York Dolls, Visage, a poem about suicide, a flamenco dancer, Charles Aznavour and images of Margaret Thatcher to the tune of “Ding dong the witch is dead.” No mellowing over the years then.

The set kicked off with a modern version of The Queen Is Dead, Morrissey sporting an Elvis-esque blue shiny top. He had a touch of the Indiana Jones/matador about him as he whipped his microphone cord about throughout the set. One of my favourite early tracks in the show was Staircase At The University. It’s probably a bit un-PC to find lines like “And if you break your legs, then don’t come running to me” quite as amusing as I do. Whilst favouring tracks from the recent album, World Peace Is None Of Your Business (so would you kindly keep your nose out), there were a smattering of Smiths tracks, my favourite being What She Said, an exquisite piece of lyricism. “What she read, all heady books she’d sit and prophesise. It took a tattooed boy from Birkenhead to really really open her eyes…”  Genius! With so many gems in the back catalogue, I’d have liked a few more oldies (I’ve always had a massive soft spot for “Some Girls Are Bigger Than Others” because of the lyrics and stunning guitar), but I guess he has to primarily promote the current product.

Morrissey was in playful form, informing the crowd that “Some people prefer Brighton (to Bournemouth) for some reason…” and introducing his guitar player Boz as “A big port lover, so send him a picture of Southampton Docks”.  As the gig headed towards its end, the number of fans hurling themselves over the barriers to try and touch the main man increased. They clenched fists like goal scorers in the FA Cup final when they hit their target. And Morrissey himself gave a final flourish as he ripped the shirt from his body at the end, to be followed by his drummer deciding to chuck his kit about at the end, toys out of the pram-ish.

Seeing Morrissey live is a massive tick on my bucket list – I was too young to see The Smiths at their peak. His voice was marvellously strong and I’m not sure I appreciated its full glory back in the day. As he said, “I’m here today,  but I may not be here tomorrow.” A sad thought indeed.