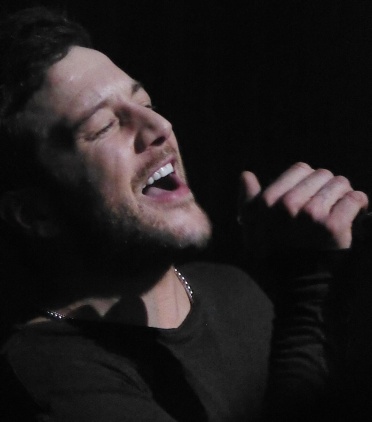 It’s been a while since Matt has performed his own headline gig, and with this event being billed as a showcase for album four, there was plenty of anticipation in the air at the prospect of hearing new material with an electronic feel. The first previews of this change of direction were well received at The Lowry last May, where Higher Power, Hallelujah and Don’t Hold Back were unveiled. Subsequently, Matt took to the stage with an award winning debut as Huey Calhoun in Memphis, starring opposite Beverley Knight, showing his versatility as an artist. It’s been a confusing time for fans, who had been told that this album would be released in October, but the Memphis schedule clearly had a delaying effect on this. There was a fair amount of heckling from the Hippodrome crowd on the subject, which was dealt with in good humour by Matt (although he did comment towards the end that he feared for his life if he didn’t get on with it!). Wisely, he refused to be drawn into giving specifics about the release, otherwise the album could end up with more dates than Tinder.

Matt was accompanied for part of the set by Alistair McMillan on djembe and by Paul Bullen on piano/keyboard. The three boys rarely perform together, and haven’t been seen on stage since the Highbarn gigs of 2012, but proved to be a cohesive unit with a natural bond and understanding of each other. Invisible threads of communication can be sensed. At one point Matt blew Ali a kiss – it was a beautiful moment. Ali’s presence meant we got the deluxe version of It’s Only Love and a new interpretation of Starlight. I’ve never quite bonded with the acoustic versions of these songs before, but the threesome certainly gave a superior dynamic to these well loved tracks to produce my favourite non-band versions yet. The djembe also added an extra injection of power to set opener Higher Power, a stunning and moving track lyrically based on the comforting words of a saviour.

Whilst Ali and Paul looked very smart in their suits and ties, “natural Matt” was wearing jeans with a ripped knee. As a visual sandwich, the bread was artisan, crafted with organic flour and cooked in an Aga. Matt seemingly reached for the comfort of a jar of Marmite for the filling, rather than bothering with smoked salmon. Thankfully. I get nervous when the stylists go near him.

While most of the new songs heard at The Lowry dealt with the thorny issue of rehab, the “new new” stuff reverts to the theme of the hopeless romantic who has been, well … frankly a bit hopeless at getting it right. (Possibly the rehab wound has been poked enough for the time being, but you sense there’s more inspiration in the pipeline from that issue). Nirvana, With You, Ten/Ten and Human Nature, are all heartfelt, emotional and atmospheric in their current form. As a big fan of the band, it’s difficult at the moment to see how these songs will translate on tour, and it’s also hard to see how the fabulous fabled track The End, written at a time when Matt’s music was high on instrumentation, will fit into the new landscape. However, songs such as Beat of A Breaking Heart changed into different beasts on the Letters Tour, so time will tell how that story unfolds.

The evening also allowed Matt to show off his vocal talents with old favourite First Time, new favourite Chandelier (a four chair turner if Matt had been the one doing it on The Voice) and the gorgeous first performance of I Can’t Make You Love Me. Accompanied by Paul on the grand piano, with jazzy tones in his voice, there comes a point where you just hold up your hands (partly to wipe away the tears) and say, “Wow, that is just too good.” He is simply exceptional at this kind of thing.

The intimate setting was fitting for the beautiful, and fitting for the nature of banter that Matt indulges in. Never shy of dropping an f bomb, he has a way of making you feel like you’re a mate down the pub and has a range of endearing mannerisms to engage his audience. With songs like Amazing, Hallelujah and Blue (the last two being even better than previous versions with the use of the backing track), the crowd were on their feet having a good old sing-song and showing their appreciation. Generous and patient as his fans are, the feeling was that the gig metaphorically gave Matt a big hug combined with a gentle boot up the backside, the message being, “We love you, but can we have album 4 and more gigs like this please?” Over to you Matt.

Photos and videos courtesy of @GentlyWeeping/moominty.