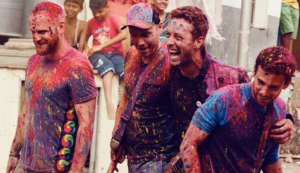 Coldplay get plenty of stick in the media, seemingly based on the fact that Chris Martin is a nice guy who’s a bit posh, and they have the cheek to write popular songs. The last album, Ghost Stories, was a complete change from their usual stadium pleasers, a detox of musical excess and frankly a bit glum in tone, but it did give us beautiful tracks like Magic, Midnight and Oceans.

The feel of this album is much more upbeat and jubilant, with artwork bright enough to set off a migraine. If it is, as suggested, the final Coldplay album, it is a far more representative way to finish their career. They seem thoroughly chuffed with life and the world, referring to the magic of dreams, the presence of angels and a huge sense of gratefulness. Even the track Fun, essentially about a break up, spins a sad event in a positive way. There are plenty of trademark Ooh-ooh-ooh-oohs to ring around Wembley stadium in a goosebump inducing fashion. Opening single, Adventure Of A Lifetime, is classic catchy Coldplay, although I find the video hard to watch, following so soon after an episode of David Attenborough’s The Wild, where a group of chimpanzees ripped a smaller monkey to pieces and scoffed it, fur and all. Bad timing chaps.

The album is awash with guest appearances, and the inclusion of Beyoncé on the track Hymn For The Weekend has a completely different tempo to what we are used to, and is a stroke of genius. “Put you wings on me, wings on me, when I was so heavy, soaring in symphony.” Noel Gallagher appears on Up and Up – there’s an unshakable feeling that if you look hard enough you’ll find a rude quote about the band from the industry’s most reliable provider of words, but actually they’re pals. And on Kaleidoscope you’ve only got the most powerful man on the planet, Barrack Obama. It’s the kind of interlude that is inexplicable and rarely works (it certainly doesn’t here). And Everglow, featuring the ex Gwyneth Paltrow, is the band at its most dreary.

By way of comparison I gave A Rush Of Blood To The Head a listen this week, and in truth it transported me back to a time when the band were on a par with Radiohead as respectably geeky. There is no parity. Rush Of Blood is a far superior body of work, searing and relentlessly brilliant in comparison to the current material, which is just a bit middle of the road. But over time it’s inevitable that artists change and evolve, and as long as they do enough to keep you engaged, you build up goodwill and an attachment for a band. So I’ll be giving my all in the Wembley crowd next June, when the whoa-whoas are required and there’s Charlie Brown to bounce around to.