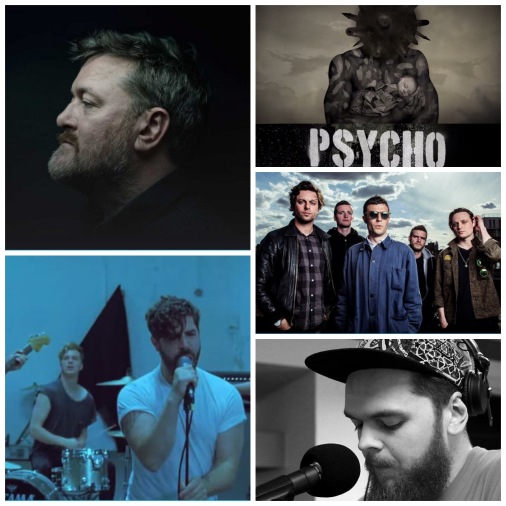 Lead singer Yannis Philippakis was quoted as saying he was “Channelling the angry Pepperami Man” in this song. A genius analogy, because he seems reasonably normal in the first verse of this song, but the sinister bass line in the pre chorus signals that something may be amiss. A rowdy chorus ensues, but the mid song lull serves merely to allow him to draw breath before having a rare old paddy in the climax. A wonderfully passionate and aggressive rock track.

2) The Maccabees, Marks To Prove It.

Pukka Indie band stuff here – there’s a load of guitars telling a story here: the stabbing one, the incessant bass, the one leading the melody and the noisy one. A hell of a yell in the background is contrasted by Orlando Weeks’s sensitive vocal. The mid song keyboard descent is soon broken by a renewed burst of energy. A rousing and thoroughly likeable song.

Completely and gloriously over the top, it’s a “straight between the eyes” rock track, blunt and direct. It typified the band’s attempts to drag back the previously excessive dalliances in orchestras and special effects. And there’s no messing about with the content, as the drill sergeant belts out his orders in the process of dehumanisation.

This solo project from the Elbow front man freed him up to experiment with some interesting sounds and instruments. It starts off with the thud of an Old Spice advert courtesy of the K-bass, and winds up with a hint of Austin Powers in the whacky keyboard solo. Of course there are the Garvey-esque romantic lyrics, “I’m a disciple of the woman’s love, and her counsel kind and wise.” Always a softy, our Guy.

With Ed Sheeran taking an extended break, there’s a handy gap opening up for a talented chap on a loop pedal. Jack seems to have taken the art a step further as he plays keyboard and electric guitar as well. Winner of the BRIT Awards Critic’s Choice, there is no doubt he will be a huge name in 2016, and who could begrudge it on this evidence?