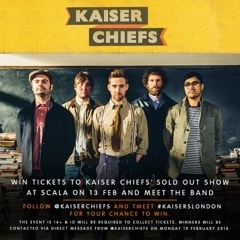 I wouldn’t queue up on a cold night in February for many people, but with un-take-your-eyes-off-able front man Ricky Wilson in town, I knew the winter blues would be swiftly blown away. The Kaiser Chiefs are back without songwriter Nick Hodgson. What effect would that have on their material? Ricky’s stint as a judge on The Voice has engaged a new potential audience, and in a recent interview he made no bones that he’d done it to sell Kaiser Chiefs albums. During the gig, he refers to the fact that a year ago they recorded an advert for Barclaycard at this venue, were paid shed loads of money and have spent it all wisely to make their new album. Such openness is refreshing, because you’d be forgiven for getting the impression over the years that he was a bit of a joker, in it for the craic, so it’s nice to see the commitment so evident.

His first foray into the crowd came early on. Who knows who he was standing on, but someone had a good firm grip on his belt and he really looked in danger of being debagged at one point. Such classics as I predict a riot and Ruby had the crowd bouncing along gleefully, in a vain attempt to follow the King Bouncer. When his career in music is over, I look forward to the Ricky Wilson aerobics video, but it will only be for extreme athletes.

There was a nice mix of old and new material from the upcoming album Education, Education, Education and War, due for release at the end of March. Misery Company sounds like the Kaiser Chiefs version of The Laughing Policeman, and I particularly liked Cannons. The essence of the sound remains intact.

At one point Ricky, the health and safety nightmare, ended up on top of the mixing desk, and having seen him climbing up the scaffolding at The Emirates and wandering through the bar mid set at Newmarket Racecourse last year, he did resemble a kid who was a tad too big for the play area. His nickname should be Heineken, because he refreshes the parts (of venues) that other artists cannot reach. Still, he got his fun in other ways, at one point being on the floor, up close and personal with the crowd, who he is able to manipulate with more accuracy than David Blaine doing a card trick. He’s clearly not a guy with personal space issues, but one who seems to take great pleasure from the fun of the moment. You can rely on the Chiefs to supply the feel good gig factor – I went home glowing like a Ready Brek kid.