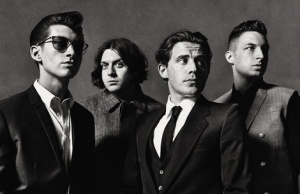 There was Monkey magic is the air at Earls Court as a seething mass of humanity approached the venue. Never mind the T Shirt and tie combination, the girl opposite me on the tube managed to pull off a patterned skirt, stripy jumper and checked jacket combination, because it was that kind of audience – young enough and hip enough to carry off anything without resorting to spray tan and ankle breaking heels. Celebrity spot of the night was John Cooper Clark sat a few seats away, and his lyrics in I Wanna Be Yours rounded off the main set.

From the first twangs of Do I Wanna Know, the gig was a bit of a comfort grub affair – one familiar and well loved tune after another hitting the spot. Brianstorm and Dancing Shoes followed and got things off to a belting start. The set list had plenty of new songs from recent album AM, but lots of the old favourites as well. Five album’s worth of material means there’s little space or need for fillers. My personal favourites of the night were Arabella, Yellow Bricks and the acoustic singalong classic Mardy Bum.

The Arctics set looked pretty plain at first sight, and certainly not in the Muse category of showmanship, but actually the light show was effective and the screens, while somewhat out of sight for those of us up above, probably did the trick for the ground dwellers. I must admit I felt sorry for the folks at the front, who were being dragged out from very early on after probably having queued for an awful long time to get their prime spot, but the crowd was just immense and, in all honesty, a rather terrifying sight.

There was an essential and sufficient dose of posturing and hip sway from Alex Turner, a nice little guitar solo on the knees and various “Elvis with a hint of Sheffield” utterances. The comb of Alex made several appearances, most notably as he asked “‘Ave you enjoyed yersen?” He quiffed as if the microphone stand had a portable mirror attached. What else could you say apart from … Aye, I did that.