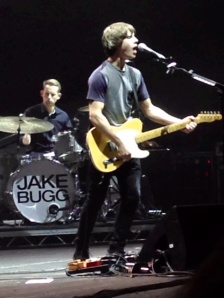 For a venue so large and impressive, the stage set up for the first of three nights at The Academy was pretty minimalistic – Jake, a guitar player and a modest drum kit on a stage where you could easily imagine a full stage production of A Midsummer Night’s Dream taking place. But there were plenty of guitars. Loads of them. And all extremely easy on the eye they were too.

Young Master Bugg mixed up the material from his debut album pretty well with new songs from the upcoming album Shangri-La. New song “What doesn’t kill you” sounds like a tongue twitter speed test, and signals a punkier rocky feel to his work and he is clearly a young man fond of an electric guitar solo. However he shines during his acoustic songs such as Country Song, As Simple As This and new tune Pine Trees. The highlight of the night was an immense singalong “Whoa-a-a-a-a” from the crowd during Broken. Many an artist would have been choked at this response, but the blissful ignorance of youth meant he just took it in his stride, as cool as you like.

I went to Brixton hoping to work out what exactly it was about Jake that has made him so successful – it certainly isn’t an impressive stage production or a smart line in patter. Jake is happy to let his personal style of retro early sixties sound do the trick along with his distinctive drawl. He’s almost rockabilly at times, and I’d actually quite like to see what he’d look like with a double bass on stage. If I had one criticism, it’s that he can over-twang and over-sing critical moments in some of his songs.

Overall, there’s no doubting the talent of the young man, or the scope for development and improvement. His progress will be interesting to watch.